Efforts to allow non-lawyers to own law firms in Arizona and Utah are picking up steam, as participating companies say it’s inevitable that more states will be following similar paths.

Utah’s regulatory “sandbox” and Arizona’s “alternative business structures” program are being closely watched by the country’s largest law firms like Snell & Wilmer, which is actively weighing the possible benefits.

“Snell & Wilmer has considered and is considering opportunities that these changes may present to a traditional law firm,” said Mark Morris, a Salt Lake City-based partner with the firm, which also has offices in Phoenix and Tucson, Arizona. The firm, he said, “is closely watching the successes and failures of others who are actively participating in these programs to help guide any future decisions.”

The fates of the two programs, which are designed to improve access to justice and spur innovation, likely will have a direct impact on the several other states that are considering loosening or repealing their own law firm ownership regulations, including California.

“We see it as a responsibility to move this forward,” said Tom Glover, president of Northwest Registered Agent LLC, a corporate registration service that owns Law on Call, a Utah sandbox participant that he says is the first entirely non-lawyer-owned law firm in the U.S.

“If we’re successful, we’re going to be showing other states the way.”

Snell & Wilmer isn’t likely in the short term to take the radical step of giving technologists or other non-lawyers an ownership stake in the firm by making them partners, according to Morris.

Still, “there may come a time when a non-lawyer’s contributions or role are so significant to the success of the firm and serving our clients that ownership in the firm in compliance with modified regulatory rules makes sense,” he said.

The 28 sandbox participants approved in Utah range from Rocket Lawyer, a company of more than 250 employees that is the only entity so far to have applied to both states’ programs, to smaller outfits such as Xira Connect, a software-based platform that connects legal consumers with Utah lawyers and state-licensed paralegal practitioners. Utah is collecting data on these non-traditional providers as the sandbox continues. 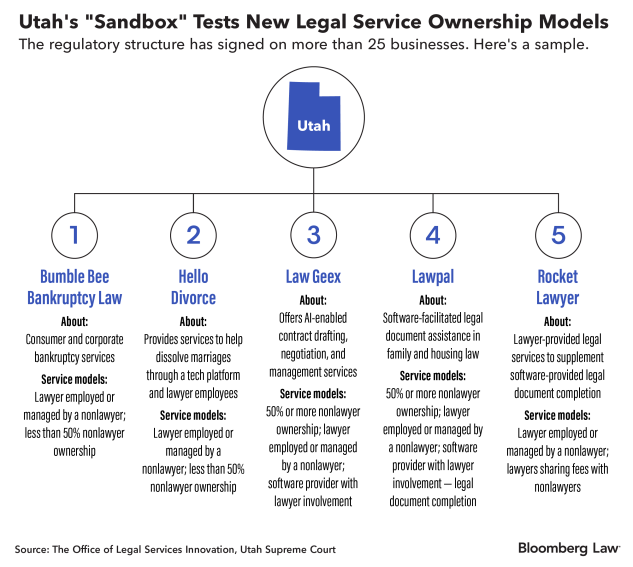 Last August, Arizona took things a step further by eliminating its version of ethics Rule 5.4, which had barred nonlawyers from having an economic interest in law firms or other legal service operations. The court simultaneously created a framework to license new types of business structures.

Arizona’s program has three new alternative business structures approved so far and another nine applicants in the pipeline. It isn’t collecting data to gauge the long-term viability of these hybrid companies, but participants must submit to background checks before they can be approved.

No firm’s application has been rejected in Arizona so far, said Suzanne Porter, manager of legal service programs for the Arizona Supreme Court.

A range of companies have applied to take part, including Singular Law Group, a divorce law firm whose website says its use of technology cuts costs for clients.

Phelps and Junior no longer have to refer clients to each other while operating separately. Now, they can build a business together—”a very powerful benefit” for clients, Phelps said. The new set-up has already led to increased revenues and several new-attorney hires, he said.

“We’ve been referred to as the Wild West, but that’s a good thing,” said Porter. Rule 5.4 for too long had been seen as a means to advance the interests of the legal industry, not the public, she said.

Though legal industry observers have suggested that a prime potential beneficiary of legal services ownership reform could be the Big Four accounting companies—Deloitte, KPMG, EY, and PwC—none have publicly expressed interest in Utah’s sandbox or Arizona’s ABS program.

Porter and Lucy Ricca, executive director of the Utah Office of Legal Services Innovation, said they have not heard a word about Big Four representatives inquiring about either program.

Deloitte spokeswoman Shelley Pfaendler declined comment. Representatives of EY and PwC did not respond to questions about the programs.

KPMG spokeswoman Amy Diaz told Bloomberg Law that the company doesn’t offer legal services in the U.S. and other jurisdictions where it is not permissible to do so.

“We follow developments around the world in regards to potential future opportunities to deliver services in new markets, including any changes in the U.S. market,” Diaz said.

Big Law firms, the Big Four, and other alternative legal service providers, will have more time to consider joining the Utah program, given that the Utah Supreme Court recently added another five years to the program. The rule changes that were made in Arizona are permanent.

People & firms on the move: Armanino achieves B Corporation certification