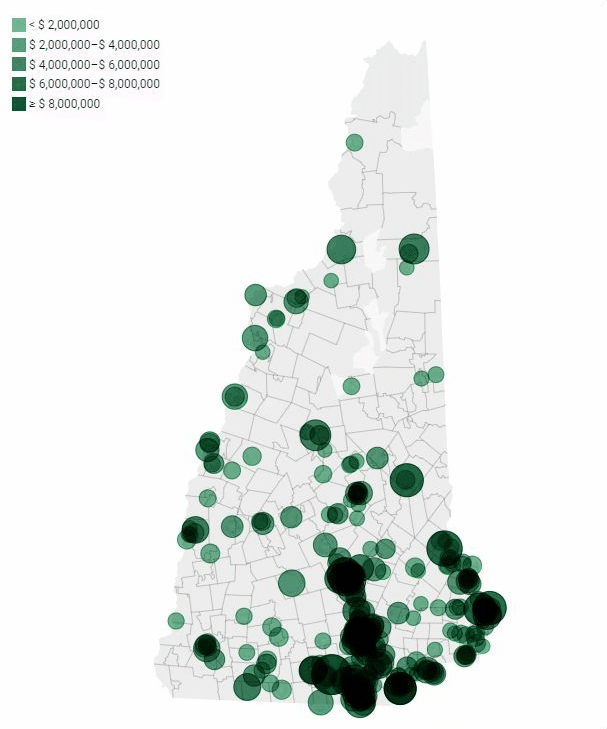 As the coronavirus pandemic began ravaging the economy last spring, Congress passed the Paycheck Protection Program, one of the landmark pieces of Covid-19 stimulus efforts intended to get cash to businesses quickly.

Until this month, the federal government shared only limited information about the companies receiving those loans. But thanks to a coalition of news organizations who sued the government to gain access to the data, we now have a fuller picture of where the money went — in New Hampshire and elsewhere.

(Want to jump ahead to the data? Click here.)

The PPP was intended to help small businesses and nonprofits (defined as those with fewer than 500 employees) stay afloat during the pandemic. More than 24,000 entities in New Hampshire received loans through the program — including NH Business Review’s parent company Yankee Publishing Inc., which received {de3fc13d4eb210e6ea91a63b91641ad51ecf4a1f1306988bf846a537e7024eeb}1.25 million, and New Hampshire Public Radio, which received roughly $1 million.

The U.S. Small Business Administration, which administered the loans, released an initial batch of PPP loan datain July, in response to pressure from news organizations and others seeking more transparency. But that data had some gaps: It excluded information about companies that received less than $150,000, and it provided only ranges, rather than specific dollar amounts.

The SBA’s latest data release provides specific dollar amounts for all PPP recipients. Using these new records, we created the charts below to help illustrate where PPP dollars have landed locally.

We only included businesses that were listed with New Hampshire addresses in the SBA’s records, so companies that do business in the state but retain a business address elsewhere will not appear here. All of the information in the charts appears as-is from the federal government’s records, so there might be some errors.

Additionally, in many cases it’s unclear how many jobs were actually supported by each PPP loan — even some of the largest ones — because that information isn’t reflected in the SBA’s data. As reported by the Washington Post, this problem isn’t unique to New Hampshire.

“Many companies were reported to have ‘retained’ far more workers than they employ,” the Post reported. “Likewise, in some cases, the agency’s jobs claim for entire industries surpassed the total number of workers in those sectors. For more than 875,000 borrowers, the data showed that zero jobs were supported or no information is listed at all, according to the analysis.”