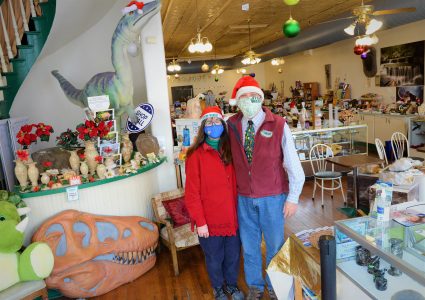 WHEELING — Well-known by many in the community for their ingenuity with interactive science demonstrations, activities, camps, workshops and starwatches — SMART Centre Market owners Robert and Libby Strong say they’ve had to reinvent how they do things with their Wheeling business.

Beginning last week, the Strongs decided to reopen their science store “by appointment only” after being closed most of 2020 due to the COVID-19 pandemic. Outside of offering occasional curbside sales to loyal customers or participating in an occasional virtual online meeting related to science, the Strongs say the past nine months has been quite the roller coaster ride while trying to properly navigate through the pandemic this year — a year unlike any in generations.

While the store still does not have regular posted hours, they are now offering holiday shopping for their loyal customers and those who may need a safer option by appointment only, Appointments are limited to three adults to a group and face coverings are required, according to the Strongs.

Whether it’s museum-quality fossil replicas, a science kit, a powerful telescope or microscope, caddisfly jewelry, or items from Prehistoric Planet, SMART Centre Market offers a large variety of unique gifts and something for everyone in the family.

While they currently don’t offer ice cream, in a social media post, the Strongs said they “look forward to getting back to seeing some of our customers, a few at a time for your safety.”

The Strongs said they closed the store back on March 17, prior to any state safety mandates being implemented, simply because it was an interactive science store. In addition, they haven’t been able to conduct any science programs or workshops at local schools since early March.

Not being able to work in-person and conduct interactive science activities with larger groups has been one of the biggest challenges for the Strongs this year.

Robert said navigating through the pandemic has been a tough adjustment for both of them.

“It’s been strange,” Robert explained. He said just by the nature of their business, they’ve become very accustomed to working with larger groups of students with science activities — and then the pandemic brought all of that to a “grinding halt.” “And it’s been really really tough on us,” Robert added.

Now they have reopened the store by appointment only, the Strongs said they are working hard to be a part of the solution and not a part of the problem when it comes to how they are moving forward in the midst of the pandemic. They wear masks at the business and require visitors to wear masks, and they have set up a few small tables at social distances inside the front of the store.

“Kids are aware that things are different now. We have put away some of the hands-on things that are multi-use. … So, if you book something, you’re in (the store) just with your little pod. So, that’s what we’re trying now just to be as safe as possible,” Libby explained. In addition, she said when they see people walking around outside their business and looking up at “Gideon”, a giant fiberglass Tyrannosaurus rex head protruding from a second floor window, they mask-up and walk outside to strike up conversion with them while social distancing.

“So we sometimes will talk to people outside, but that’s really the interaction that we’ve had, and we try to be as safe as possible. … We try to be a part of the solution instead a part of the problem and unfortunately things just got worse,” Libby added. She said they have tried to accommodate folks interested in buying telescopes by providing them demonstrations of the equipment outside the storefront as part of their curbside sales.

“We actually sold more telescopes between March and October than we did last year during the same period” Libby commented, while pointing out there has been more of a global demand for telescopes this year. She said there are times she will alert potential customers through Facebook when they have certain items in stock. “So that’s been helpful … and we’ve had a lot of people who have bought a few things curbside delivery during this time,” she added.

Even in the midst of reports of growing numbers of COVID-19 positives, the Strongs remain hopeful the vaccines on the horizon will permit them to eventually get back to doing what they enjoy most — educating area youth and families through the many science activities and hands-on demonstrations they offer through their business.

Robert said while they remain hopeful they will be able to get back to regular store hours within a few months, “the (COVID-19) numbers have to go down,” before that happens.

“And if that takes a month or two months or six months — then that’s what it’s going to take,” Robert explained.

Today’s breaking news and more in your inbox