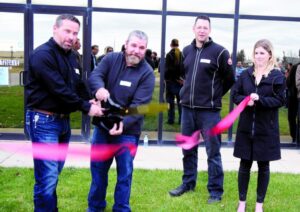 Cutting a ceremonial ribbon is one of the cheesiest sights you’ll see, but for the business owner holding the giant scissors, it’s one of the proudest, and perhaps most worrisome, moments in life.

Add to that great heaves in business and consumer confidence caused by the coronavirus pandemic.

But organizers and dignitaries who attend the traditional mixers for staff, customers suppliers and more, say the events are essential to morale and highlight entrepreneurship.

“It’s a different attitude, but it’s important,” said Janice Redmond, a new sales development officer at Action Land and Environmental, which “re-opened” its brand new location in Dunmore on Thursday.

She helped manage guest lists, and led visitors through the office facility that has adjoining bays, and held one end of the ribbon that was snipped by owners Jason Tweeten and Brian Bohnet.

Tweeten said the outlook for the environmental sector rose from depths of collapsing oil prices potentially submarining reclamation work early this year, to stability thanks to provincial and federal aid for the patch.

“But we began a pivot way back in 2010,” said Tweeten. “We’ve got the point where no (sector) makes up more than about 20 per cent of our business and among no single client.”

Now the company employs 27 workers on project for the energy firms, farmers, utilities and municipalities.

“People don’t realize what it takes to take a chance on opening or expanding a business right now,” he said.

Action is one of a growing list of businesses holding events to highlight new endeavours or expansions, and dignitaries on the ribbon-cutting trail have seen increased optimism.

“Really it speaks to how far we’ve come,” said Marcus Campbell, incoming president of the Medicine Hat Chamber of Commerce.

“The whole process has been a great opportunity for small businesses to – and here’s that word again – pivot and try some new thing, some new endeavour to strengthen their business.”

Sean Blewitt is the executive director of Community Futures Entre-Crop, which arranges financing for business startups and recently helped administer the City of Medicine Hat’s MH Big grant that helped business owners alter their operations or even add new offerings.

He said he’s been impressed with the work being done by entrepreneurs in difficult times.

“Obviously it’s a challenging time all around,” he said. “For any entrepreneur it’s a long journey and a lot of work that goes into starting a business. But it’s also very rewarding.”

While general anxiety has risen and fallen during the pandemic, and the public perception is more focused on the potential of closings, openings have been underway.

Medicine Hat Nissan also unveiled its new location, and next week the Best Western Premier and Executive Residency in south Medicine Hat is having a formal event after opening for business last month.

Figures from the Alberta business council state that considering all openings and closings since March, Alberta has seen a net increase of about 400 businesses.