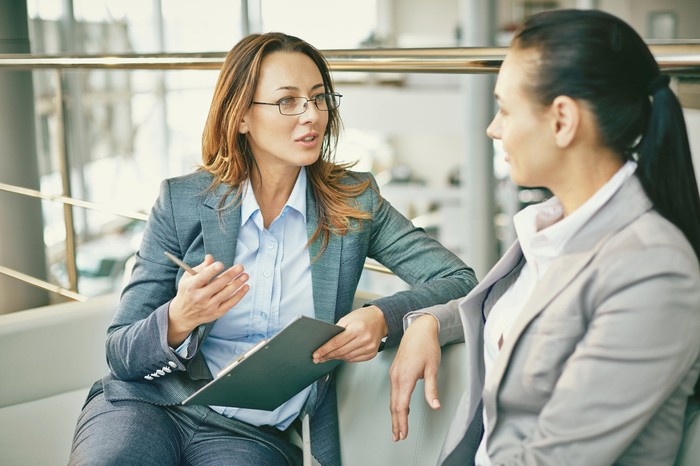 While it doesn’t influence our opinions of products, we do receive compensation from partners whose offers appear here. We’re on your side, always. See our full advertiser disclosure here.

It was 1949 when my mother went to work for the U.S. government. She loved her job, and at the very end of her life, she was finally willing to share some of her stories. There was a firefight on the Pakistani border, camel races in the desert, and secret deliveries to fierce-looking men in Kashmir.

Despite a sharp intellect, a wicked sense of humor, and brave nature that bordered on carelessness, Mom came home to a country that would not allow her to open a bank account, take out a mortgage in her own name, or open a credit card. Above all, my mother could never expect to be paid as much for a job as a man.

It wasn’t always this way

Throughout history, many civilizations afforded equality to women — for a time. For example, in 4000 B.C., women living in Sumer (now modern-day Iraq) had the same privileges as men in business. In 17th century Arabia, women could own property, inherit wealth, and be the one to begin divorce proceedings. Even in 18th century Louisiana, some women were allowed to retain their legal identity, own half the property accumulated during marriage, and earn their own money.

It would be easy to blame England for introducing the notion of coverture in the Middle Ages — the theory that married women are under the authority of their husbands, both physically and financially. But the truth is, civilizations across the globe had long before begun to shift their way of thinking and decided it would be better if women were under their control. According to the BBC, the shift appeared throughout history as civilizations began to write down their laws. As groups of men sat together, determining what the laws of their land should include, they added bits meant to ensure that men would be the dominant players in society and women would be edged out. As the BBC put it, “this is when the patriarchy becomes enshrined.”

Perhaps the changes were introduced so slowly that women did not realize what was happening, or maybe girls were molded by their families, neighbors, churches, schools, and new laws to believe that they were second-class citizens. One reason for their misconception could have been the fact that men purposefully left women out of the decision-making process. For the most part, women weren’t asked to help write laws or religious doctrine. They did not sit on committees voting on corporate or community matters. In other words, women had very little input in the rules and regulations that would control them.

In the U.S., the consequences of a male-dominated society included an expectation that women would marry, have children, give up any dreams of their own career, or take a job that paid a fraction of what men were earning (after all, they had families to support).

It became darn near impossible to leave a relationship because, without a husband, how was a woman supposed to feed herself and her children? How could she pay bills without the ability to open a checking account? It also made little girls born during that time accept that the world is not a fair place and being a girl meant being subject to the whims of men.

For some, enough was enough

It’s impossible to know how everyday American women felt about their limited rights. However, by the early 20th century, suffragettes made their voices heard by fighting for the fundamental right to vote in public elections. And in 2021, it will be 100 years since suffragettes began the fight for the Equal Rights Amendment, an amendment to the constitution declaring this nation’s belief that women and men are equal.

Slowly, and always with opposition, women won fundamental rights to work and earn a living. For example, in 1963, President John F. Kennedy signed into law The Equal Pay Act, promising “equitable” wages for workers in the same job, regardless of sex, race, color, religion, or national origin. The next year, Title VII of the Civil Rights Act prohibited employment discrimination based on sex. By 1971, the U.S. Supreme Court made it illegal to refuse to hire a woman because she was the mother of preschool-age children.

Just as slowly, women have gained the right to handle their finances. In 1903, Maggie Lena Walker was the first woman to open a chartered bank. Although it was quite an accomplishment, it was not until the 1960s that women were granted the right to have personal bank accounts. In other words, Walker could own a bank, but she needed a man to help her open a bank account.

Even as women were allowed access to their own money through bank accounts, society was hard at work reminding them of “their place.” For example, a 1965 leaflet distributed by the Department of Labor Women’s Bureau read in part, “Your husband, as the person legally responsible for family support, has the right to make this decision (where the family should live). Unless he agrees to a separate residence, legally you must live where he provides the home, which is usually where he works.”

Some rights were granted in fits and spurts. For example, The Fair Housing Act forbade discrimination in home lending based on gender in 1968. Still, it wasn’t until 1974 that the Equal Credit Opportunity Act banned the requirement saying that women must have a male cosigner to apply for credit or loans.

Today, women can open bank accounts, take out loans, make investments, and build impressive portfolios — but still have a long way to go. Women — and the people who love them — continue to fight for:

Financial equality begins with equal treatment throughout life. If little girls are taught that certain subjects are “for boys,” they may limit themselves or be excluded by those already in positions of power. If young women feel pushed into college majors and jobs that appear to be a better gender fit, they lose the opportunity to earn as much money as they could have made if they’d been allowed to follow their passions. If it is assumed that a female is the only parent capable of staying home to care for children, she loses traction in the workplace and may never meet her full earning potential.

For women to reach full financial equality, they must be considered equal in every aspect of life. Realistically speaking, it is a goal that can only be achieved when enough people follow the suffragettes’ lead and speak out.