There aren’t many contexts where $2 trillion seems like a paltry sum. Then a pandemic comes along.

The economic fallout from COVID-19 has left insurers issuing existential warnings and businesses discovering they weren’t covered. It’s resulted in courts packed with lawsuits and governments scrambling to head off more pain.

At the core is the reality that the global non-life insurance industry’s $2 trillion in capital won’t last in a “black swan” event, such as a cyber attack or another pandemic, that hobbles the global economy. Lawmakers in the UK, the European Union and the U.S. are grappling with ways for taxpayers to help in a more predictable way than hastily assembled bailouts. Insurance giants including Chubb Ltd., AXA SA and Lloyd’s of London are pushing for action before the lessons of 2020 fade.

“Pandemic is not a risk you can cover,” Swiss Re AG Chief Executive Officer Christian Mumenthaler said earlier this year on an earnings call. “Balance sheets of insurers are a tiny fraction” of what might be needed during a calamity.

Anything as large as pandemic risk, the industry argues, will need government support. The coronavirus has shut down global economies in a way that very few prepared for, with revenue for millions of businesses cut or totally lost as they were forced to shut their doors. But it’s far from the only possible threat.

“If we walk away from risks that are too difficult to insure, if we don’t look instead to use our expertise to find innovative and creative solutions, such as public-private partnerships and working with academia, we risk becoming irrelevant,” he said in an interview. 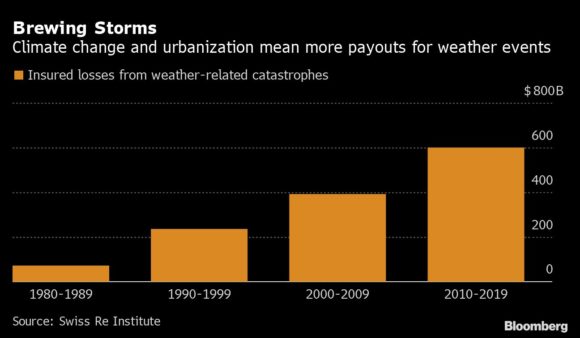 To be sure, governments have borne the brunt of pandemic-related relief costs in 2020, with the International Monetary Fund estimating that taxpayer-funded rescue measures have already reached $12 trillion. Insurers in the U.S. have found that courts generally side with them in disputes over coverage of pandemic-related business losses, while others in the UK and Europe have lost some high-profile legal battles.

Read more: Insurers Winning Most, But Not All, COVID-19 Business Interruption Lawsuits

Insurance markets for events, travel and business interruption have all been roiled by the virus. For those looking to protect against the possibility of pandemics, most will find that firms are offering few safeguards going forward. Allianz SE, Europe’s biggest insurer, said it will focus on tightening up contracts to exclude pandemics. Munich Re has stopped selling business policies that cover pandemics.

“In all our lines of business, we’ve tightened up terms and conditions where it needed to be tightened up, provided additional clarity,” Christopher Swift, CEO of Hartford Financial Services Group Inc., said Tuesday at a Goldman Sachs Group Inc. conference. “As we get into a second wave here, we don’t think we’ll have any increased exposure.”

Conversations on government backstops are at early stages as proposals of different shapes and sizes are presented by insurers and scrutinized by lawmakers. The response from governments has varied by country, with France and the U.S. furthest along in their efforts to settle on a plan.

U.S. lawmakers have been discussing a federal reinsurance program based on an existing backstop for terrorism risk created in the aftermath of the 9/11 attacks. In France, Finance Minister Bruno Le Maire, who himself contracted coronavirus, plans to announce a plan before the year is out.

Other countries need to follow the U.S. and French lead and push for an agreement while the current crisis is still foremost on lawmakers’ minds, according to Lloyd’s of London Chairman Bruce Carnegie-Brown.

“People get forgetful pretty quickly,” he said. “As the pandemic begins to unwind, I can easily see this falling down the agenda.”

One of the chief stumbling blocks for any agreement is how much of a burden the industry will be expected to take. In France, insurers agreed to freeze premiums for hospitality and other worst-hit sectors in 2021, after Le Maire threatened them with an exceptional levy if they don’t provide aid to hotels and restaurants hurt by the crisis.

Representative Carolyn Maloney, a Democratic lawmaker from New York, has proposed a bill called the Pandemic Risk Insurance Act, modeled after the 9/11 terrorism backstop. That effort has drawn support from the Risk and Insurance Management Society, a group of risk managers at different companies.

“We need a framework to provide relief in the long-term when a pandemic like COVID-19 hits,” Maloney said in a statement that also called for more short-term relief measures. “PRIA will provide a framework for small businesses to get the relief they need, without having to wait for Congress to pass another emergency bill.”

Chubb, the global insurer led by Evan Greenberg, has drawn up plans for a public-private partnership in which the federal government would assume a “substantial percentage of the risk,” and with insurers bearing some costs as well. Others in the industry, such as the American Property Casualty Insurance Association, are opposed to insurers putting up any cash at all.

“Trying to find a way to balance all of this is going to be very important,” Mark Humphreys, a vice president of litigation and risk management at Watt Cos., said of a U.S. pandemic-relief proposal under discussion. “The hope would be that there will be some federal tax money spent as a backstop, but that the dollars charged to the taxpayer overall, especially if there’s another really big pandemic, will be lower than if there was no insurance available.”

U.S. lawmakers have stepped in before to cover insurance gaps for various threats. Flood risk is covered by the National Flood Insurance Program. Californians can find protection from earthquake costs through a state program that is privately funded and publicly managed.

Both the U.S. Terrorism Risk Insurance Act and the UK’s Pool Re were set up in response to major attacks, and similar efforts to deal with pandemic risk are being discussed in both countries. The measures helped insurers to provide coverage while consumers could access terrorism insurance at a price they could afford.

The aim of the pandemic proposals is to ensure that small businesses, if told to close their doors again to halt the spread of another virus, will be compensated directly for loss of revenue. Some proposals, like the one in France, are targeted specifically at smaller firms.

Proposals like Lloyd’s of London’s “Black Swan Re,” which would cover systemic risks such as accelerated climate change and global cyber-attacks in addition to public health emergencies, have been discussed in the past, but never taken seriously, according to Paula Jarzabkowski, a professor of strategic management at the Business School, City University of London. Given the economic devastation caused by the coronavirus, this time could be different.

“It’s always been seen as too hard — it hasn’t happened yet,” Jarzabkowski said. “Well, we have got a really good disaster now.”

–With assistance from Marion Halftermeyer and Alexandre Rajbhandari.

Top Photo: Insurance markets for travel and business interruption have been roiled by the virus. Photographer: Christof Stache/AFP/Getty Images