Big Blue might be preparing for the spinout of its Kyndryl managed services company, now slated for early November, and its new financial presentations, which we reviewed two weeks ago, but that task is not yet done and until it is we are still getting the same financial view of IBM in the third quarter of 2021 ended in June. It was not a particularly memorable quarter when it came to IBM Systems group.

But it is looking like IBM is going to be able to pad a better 2022, with Kyndryl taking on a huge amount of software and a reasonable amount of iron as it leaves its parent company. To be specific, next year Kyndryl will spend somewhere around $500 million on System z and Power Systems iron and IBM technical support for the platforms that run its managed services business while spending around $2 billion for mainframe software rentals, various Red Hat software licenses, and a smattering of Power Systems software, security software, and database and AI software. This would have been all internal sales at IBM between groups and not reported externally had Kyndryl not been spun out, and now IBM can count on $2.5 billion a year from Kyndryl – and presumably at a healthy margin – for the foreseeable future. And this will account for about a quarter of the entire remaining IBM’s estimated $10 billion in free cash flow for 2022.

We would not be surprised if Kyndryl has to buy some big Power10 iron in Q4 this year, by the way.

Also in 2022, the System z16 Telum mainframes will ship, helping boost hardware sales at least for two quarters, maybe three, and the Power10 rollout will be ramping as well here with big iron shipments as 2021 comes to an end and as 2022 gets rolling, and then the Power10 entry machines will be coming in perhaps May or June of next year, starting the next cycle.

It is hard to say what IBM’s Power Systems plan will be aside from serving its existing customer base – we are not hearing a lot of talk about hybrid CPU-GPU systems taking on HPC and AI workloads as we did during the Power8 and Power9 generations, which is a bit disconcerting given the explosive growth we are seeing in these two technical computing markets. To be fair, there is plenty of SAP HANA business, and IBM is winning its share of this, and there are somewhere on the order of maybe 150,000 IBM i and AIX shops in the world – call it a 120,000/30,000 split – and there are only 3,000 HPC centers in the world. It is not hard to reckon what business Big Blue should take care of first and where the profits can be had.

That said, IBM needs to have a much stronger HPC and AI business, and the executive team there has all changed and, importantly, the core people who did distributed X86 clusters (which represented the bulk of the HPC business at IBM) were sold off in 2015 to Lenovo. Maybe IBM should have bought Lenovo instead of selling the System x business. . . .

Anyway. We have to deal with what is, not what we hope to be to get to where we want to be.

In the June quarter, IBM’s revenues rose by a third of a point to $17.62 billion, but its gross profits fell by 3.1 percent to $8.17 billion and, thanks to higher costs across a lot of fronts – particularly sales costs, general overhead, research, and development costs as well as a higher tax rate – IBM’s net income fell by 33.5 percent to $1.13 billion.

The Systems group was not the star of the quarter, and swung to a pretty significant operating loss as the costs of the “Telum” z16 and “Cirrus” Power10 processors and the development of the systems that use them come home ahead of the rollouts next year – and what we presume are higher system costs for z15 and Power9 machinery due in part to supply chain issues thanks to the coronavirus pandemic. (Everyone else in the hardware business is feeling this pain, why not IBM, too?)

IBM did not have much to say about Power Systems sales, but its chief financial officer, Jim Kavanaugh, had this to say: “Late in the quarter, we began the roll out of our next generation Power10, starting with high-end system. As always, new Power technology is introduced over time, and the midrange and low-end Power10 systems will be available during 2022. Storage delivered 11 percent revenue growth, driven by demand from hyperscalers for our tape products and growth in entry level all-flash storage following our product refresh earlier this year. Looking at profit in this segment, profit margin was down, reflecting where we are in the IBM z and Power product cycles.”

I personally do not like the attitude that is evolving at IBM when it comes to Power Systems. It is not a foregone conclusion any more that the world will just use an Intel Xeon processor. The world has changed, and there are opportunities for IBM to expand the Power base, not just ride it down over the next five or ten years. But to create a business that has a real future and real differentiation. I don’t see anyone talking about that, and certainly Ric Lewis, the new general manager of Systems group, who was just brought in from Hewlett Packard Enterprise and who knows the midrange systems business, as well as the high-end systems business, as well as anyone out there. IBM needs to get up off its ass and actually do something to make the combination of its Red Hat stack and its hardware stack better than anything else out there. And if it can do that – as was promised with the OpenPower Foundation and still yet to be delivered – then the IBM i and AIX platforms will be healthy, too.

Right now, it doesn’t look good at what will probably be a low for the Power Systems business. Here is our revenue model for sales of servers and storage based on Power machinery: 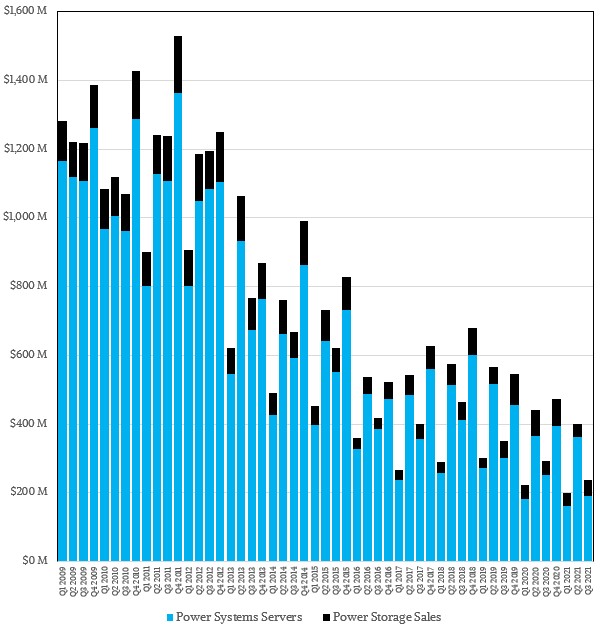 The good news is that Q3 2021 was not the worst quarter for Power that IBM has ever had, but the bad news is that it is the third worst quarter. (As we have pointed out before, a big part of the decline since 2018 has been China’s desire to have indigenous suppliers for key systems, and the Inspur partnership with IBM probably accounts for about a third of worldwide Power-based server revenues – but we can’t see it reflected in IBM’s own numbers.

If you do drill down into IBM’s sales for systems, and do some estimating converting its constant currency figures to as reported figures, the numbers are not particularly pretty in Q3 2021. External systems sales were $1.11 billion, down 11.9 percent, and internal sales to other divisions (like the chunk of Global Services that is being spun out into Kyndryl) were $176 million, down 26.7 percent year on year. So overall systems sales – servers, storage, and operating systems – were $1.28 billion, down 14.3 percent. We reckon that IBM’s systems hardware revenues were $803 million, down 13.4 percent, and operating system sales were $304 million, down 7.9 percent, and gross profits across Systems group fell by 29.3 percent to $454 million. When you add in costs above and beyond the bill of materials, including research and development, then IBM says that it reported a $207 million pre-tax loss. This is the kind of loss IBM normally sees in the first quarter of the year, and the third quarter usually does a little bit better than breakeven and sometimes pretty good but never like a fourth quarter.

We think, based on our revenue model, that Power-based servers accounted for $191 million in revenues, down 24.4 percent, and that Power-based storage was up 12 percent to $45 million. If we had to throw a number out there, we think operating systems and core systems software on Power-based machines (but not storage software, transaction processing software, or database software) accounted for maybe $45 million to $50 million, and storage-based software (which is not counted next to the hardware in Systems group but pads the other software division to make it look bigger and more profitable than it is) could have been anywhere from $50 million to $100 million. Here’s the rub. Database, transaction processing, analytics, AI, and development tools for Power-based machines could be much larger than all of this put together – and IBM refuses to tell the story of the actual business this way.

This is not just annoying. It is damaging to this Power business. And I, for one, do not like it one little bit.

The Shape Of The IBM To Come

The Big Iron Customers That The Power E1080 Is Aimed At

Awaiting The Power10 Rollout And The New Sales Cycle

Just How Big Is The Whole Power Systems Business?

Power Systems Slump Is Not As Bad As It Looks

The Ups And Downs Of The Server Cycle

IT Starts To Feel The Impact Of The Great Infection

The IT Sector Could Weather The Pandemic Storm

The Midrange Gets Pinched A Little More 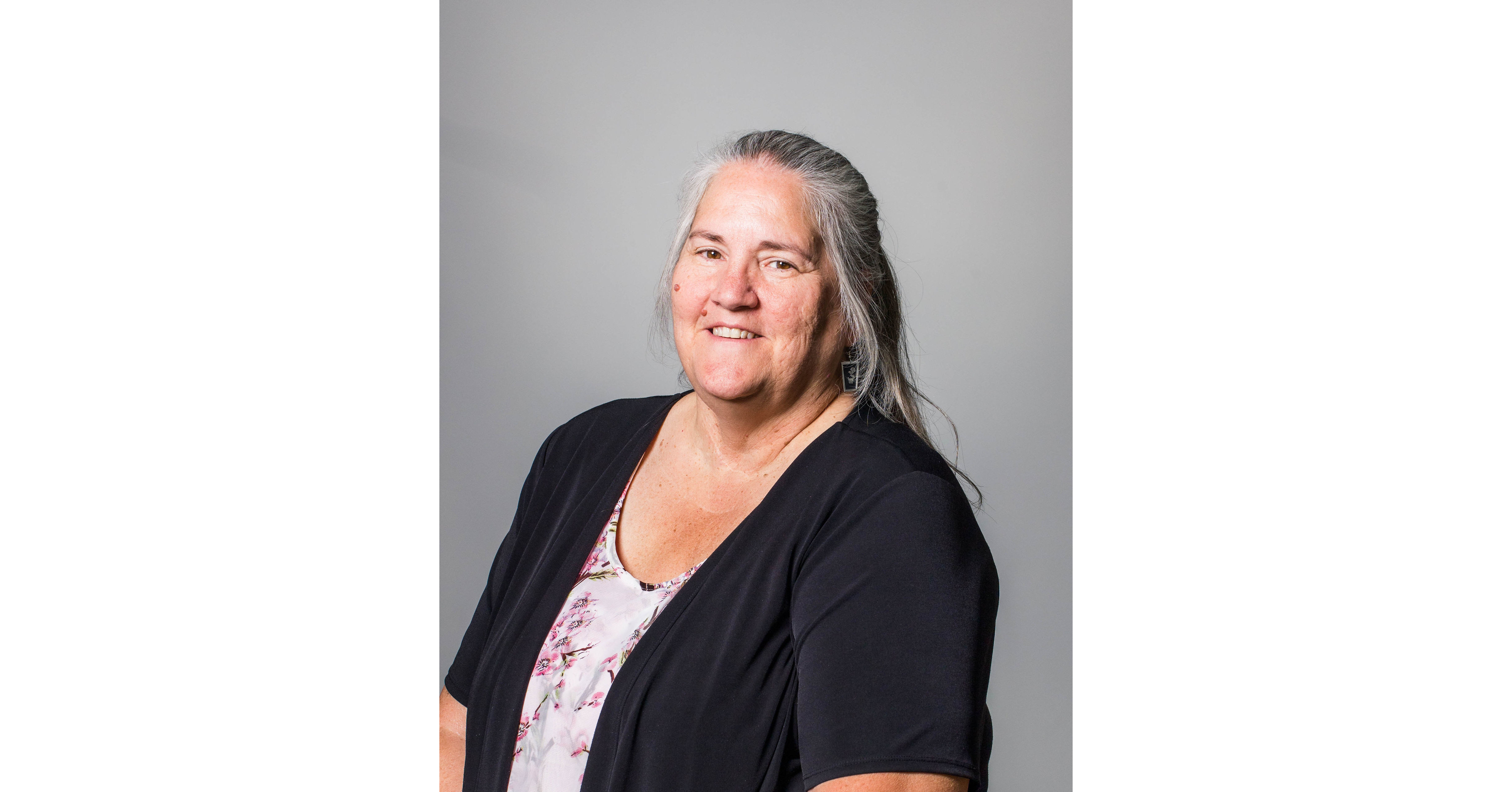